There’ll be no total lunar eclipses for 2.5 years!

So hopefully the sky will be clear on this evening, and we’ll have our chance to shoot this beautiful celestial phenomenon. Fingers crossed!

In this article I’ve collected the useful infos about this eclipse, and also included my tips for taking photos of it.

What is a Lunar Eclipse?

Lunar Eclipse takes place when the Moon enters into the shadow of the Earth.

Because of this, Lunar Eclipse always happens at Full Moon: 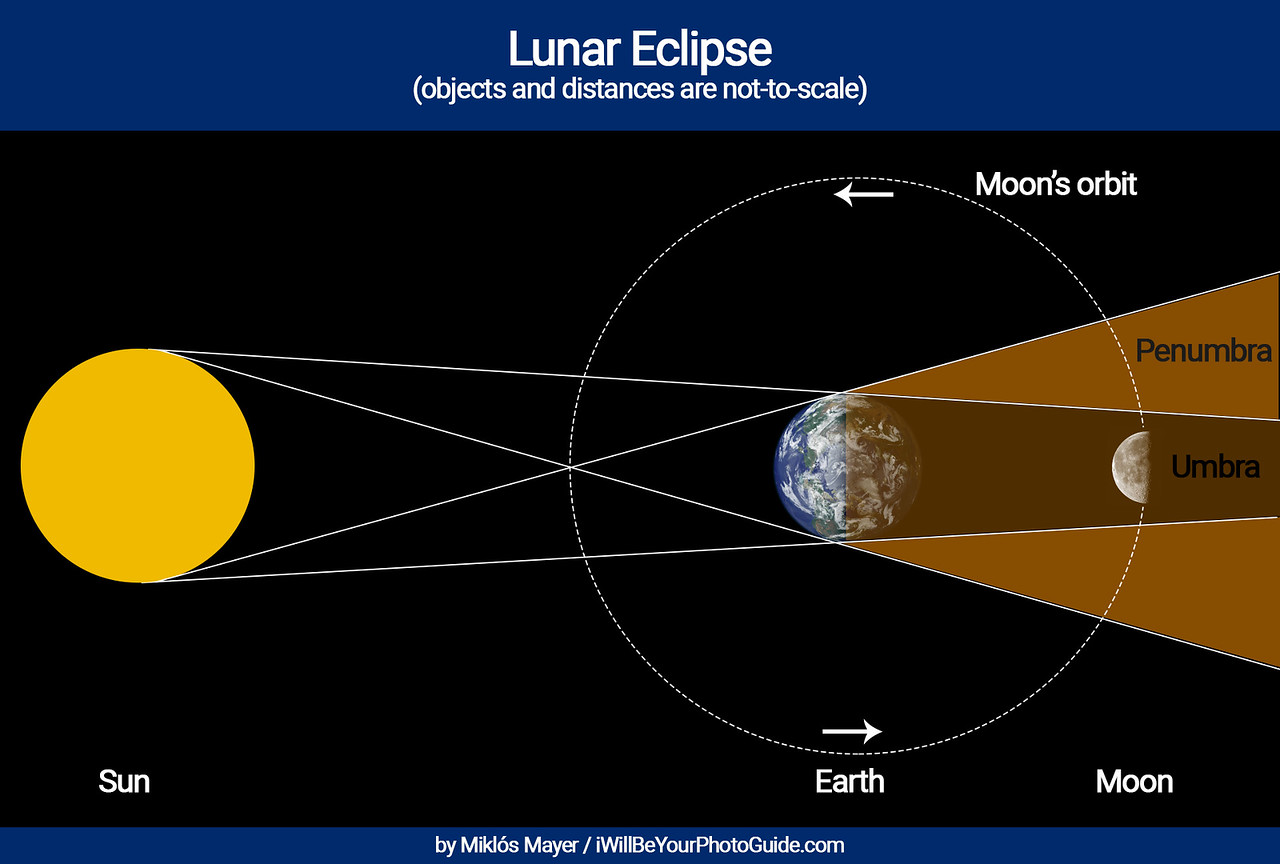 But of course, a Lunar Eclipse does not happen at every Full Moon. It happens between 2 to 7 times a year.

Of course, not every Lunar Eclipse is visible from where we live.

Also, often the Eclipse is just Partial Eclipse, which means that the Moon travels through only the half-shadow (penumbra) of the Earth.

While during a total Lunar eclipse, the Moon travels through the full shadow of the Earth (umbra). See Wikipedia’s article here.

The above picture may be a bit misleading in terms of how big the Earth shadow is. It’s actually quite small, roughly comparable to the Moon’s size (usually 2-3 times wider than that):

Please note that the illustration below operates with GMT time values.

The whole eclipse will be visible from South and North America.

From Europe, the Moon will be setting down during the eclipse, while from most of Asia and Australia, the eclipse will not be seen.

See the image the bottom side of the image above.

My tips for photographing the Lunar Eclipse

Tip #1: Create an astrolandscape photo composite with different stages of the Eclipse

Well, these photos are not single exposures, they are always composites.

Here’s how to do a composite astrolandscape shot with multiple Moons during lunar eclipse:

The Moon moves approximately 13 – 14 degrees per hour on the sky. This means that if you want to catch the whole eclipse, approx 5 hours timespan, then you’ll need to have a lens that has at least 50 – 70 degrees field of view.

In practice this means lenses around 24 – 35 mm focal length on a full-frame camera. But don’t worry, if you have a longer lens: if you just capture a part of the eclipse, that’ll be fine too.

Also, planning with The Photographers Ephemeris is a big help. This software allows you to see where exactly the Moon is at a given time and location: 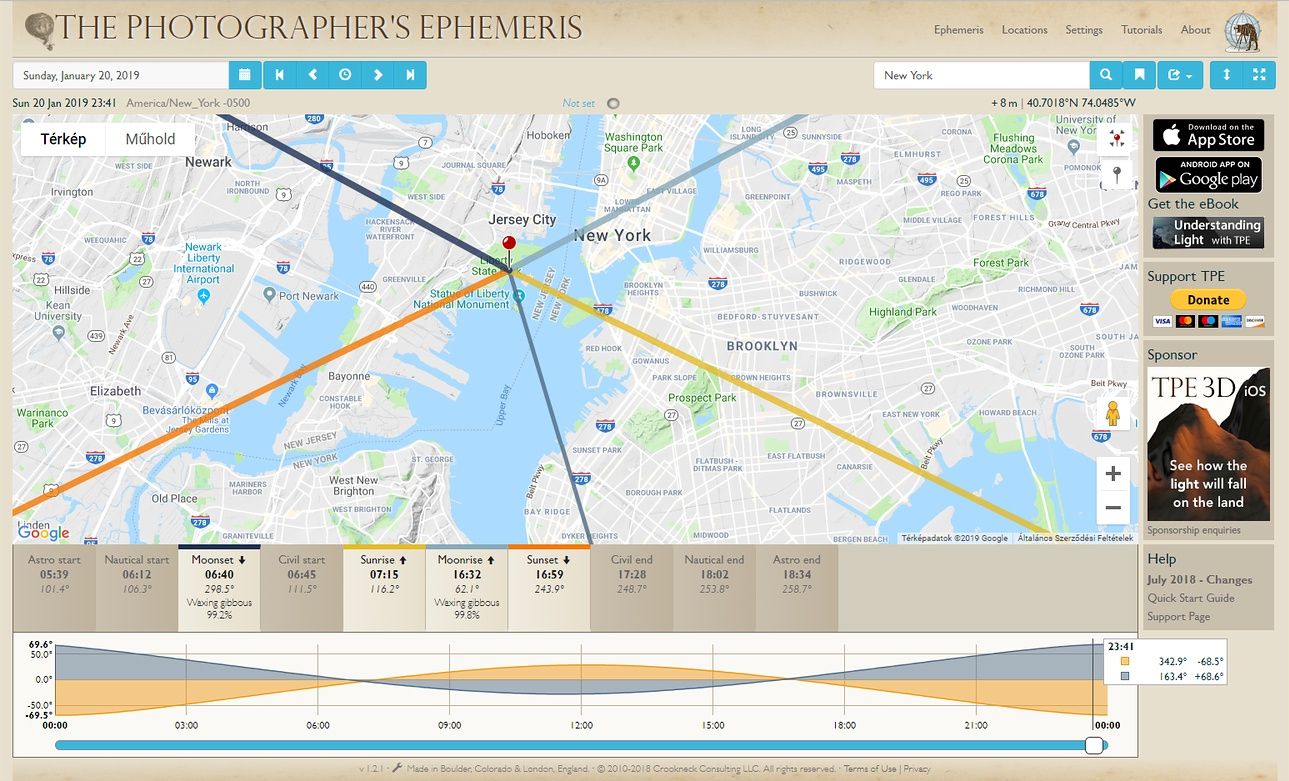 Once you have your composition with your preferred lens, stick to it. This way the composite photo will show the real position of the Moon compared to the landscape.

I emphasize this because I often see composites that are created from several pictures taken with totally different focal lengths (for example the landscape is shot with a 24mm lens, then the Moons are shot with a 200mm lens, and they are composited). This always results in a very noticeable “fake” look…

I don’t want to show bad examples, but this one is a “perfect” example on how not to do composites (I put this example here, because the photographer is not mentioned by name).

Step #2: Take shots of the landscape

In the beginning you should take shots with the purpose of properly exposing the landscape.

Quite probably the Moon will be in the picture, and it will overshine everything on the sky. But don’t worry, because later you’ll take shots that are exposed for the Moon.

Step #3: Take photos of the Moon at intervals

This is the part that you have take exposures at certain intervals (maybe in every minute, but this depends).

Using an intervalometer is the easiest way to do this.

If you have an intervalometer like I have, just set everything to 00:00:00, and just set the INTL value to your desired number. More on this later.

Make sure that you’re shooting in Manual mode, and you constantly check the brightness of the Moon, and you re-adjust the exposure if needed.

After the end of the sequence for the Moon, it’s best to take another series of photos for the landscape. This can be a “backup” for the post-processing part.

Step #5: Stack them in Photoshop

Once you’ve edited your photos in Lightroom, select the ones you want to include in the composite.

Ideally these single photos should be the same distance apart.

For example: you were shooting at every minute, and have 200 frames. Of these 200 frames, you’ll just select 20 frames.

So you’ll have to select every 10th frame, or in other words every picture taken 10 minutes apart.

Once you’ve selected and edited these in Lightroom (or in Bridge), right click and select Open as Layers in Photoshop.

This will open every frame as individual layers in PS.

After this, you’ll have to set the Blending mode of all layers to Lighten.

Now the composite is almost done.

The next step is to add the landscape as another layer, and mask out the sky on this one.

Tip #2: Shoot a timelapse video of the Moon changing colors

This one requires a long telephoto lens (at least 200 mm on a full-frame camera). The goal here is to take exposures of the disc of the Moon at given intervals.

Ideally, to reduce the post-processing work, this can be done easiest if you put your camera on a tracked mount that is capable of tracking the Moon / stars.

This way, the Moon is going to be at the very same spot on every frame, and it will be easier to merge it into a timelapse video.

Just like Alan Dyer did in his timelapse video (from 01:13):

Tip: check the exposure settings from time to time, because when the Moon enters the umbra, it gets really darker. You want to gradually open up the shutter speed / ISO speed to follow the darkening of the Moon.

Tip #3: Create a composite shot with different colors of the Moon 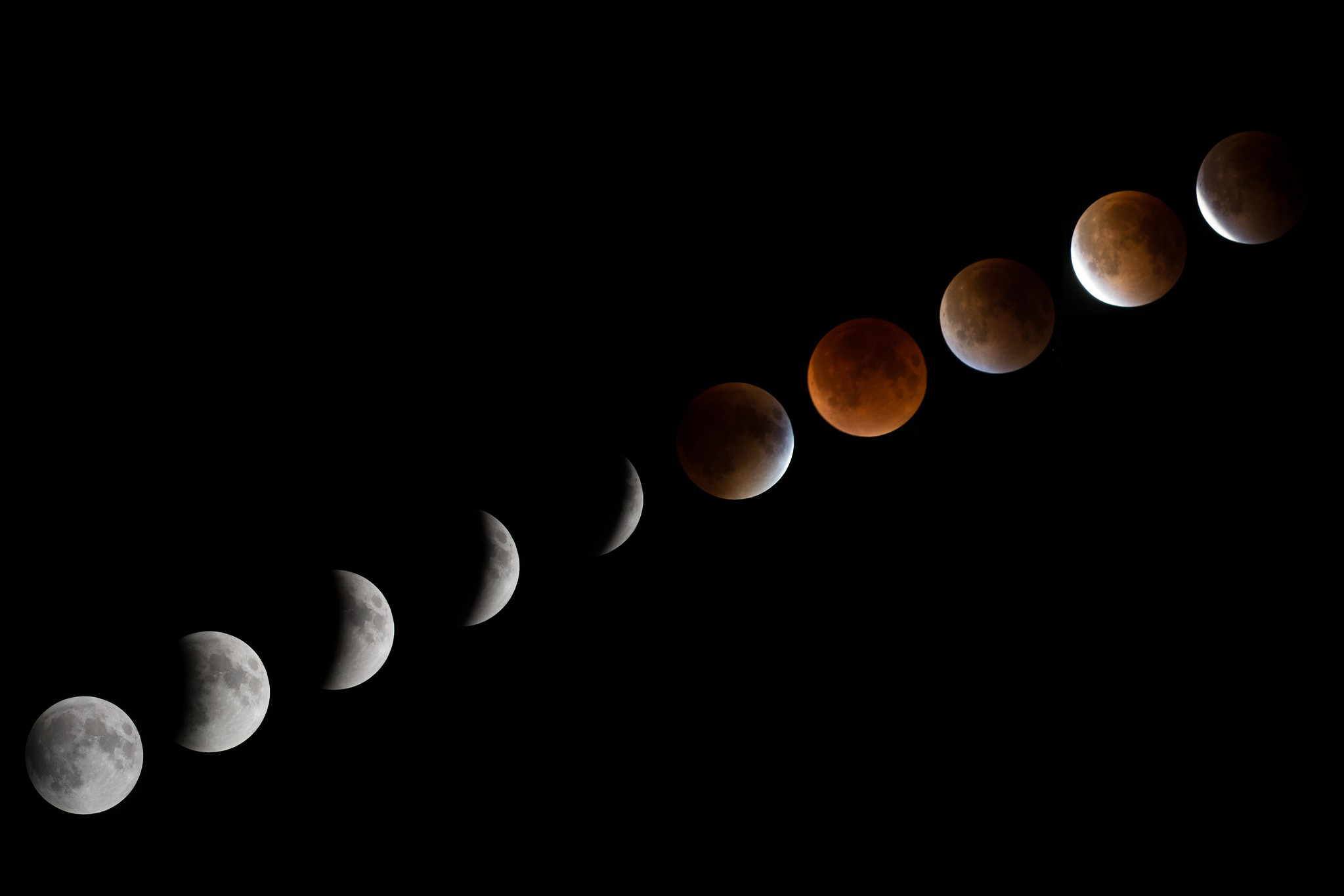 This can easily be done as the by-product of a timelapse.

Just open the selected frames as individual layers in Photoshop, but now it’s your job to place the different Moons into a certain composition.

Personally I love those compositions where there’s a clearly visible landmark on the picture.

Because then there’s a “connection” between sky and Earth, and it’s easier for the viewer to absorb the view, because there are terrestial objects that act like anchors for the brain.

Though this is “just” a normal photo without any of the fancy editing stuff, I really like how the Moon stands against the mountain landscape:

Setting the camera for photographing the Moon and Lunar Eclipse

Though you can easily take pictures of the Full Moon handheld, because it’s so bright, but when the Moon is in the umbra, it is way less bright.

In fact, the lunar disk becomes so dark and red, that it’s brightness is roughly comparable to the night sky. See Babak Tafreshi’s APOD photo here, that shows the Moon in full totality in the center of the Milky Way.

So a tripod is a must!

Set Manual mode and adjust exposure on the Moon

At night, the camera’s metering system is usually fooled by the pitch black sky. So it’s best to switch over to Manual mode and set all aspect of exposure for yourself.

This is necessary, because the disk of the Full Moon is so bright, that it would be very easy to overexpose it if you relied on the camera’s metering system.

So make sure that you constantly look out for the proper exposure.

Important: Watch out for the shutter speed.

It would be tempting to raise the shutter speed only to compensate for the brightness loss, but don’t do that. Because the Moon moves on the sky as the Earth rotates, so you can’t use whatever shutter speeds.

Use my astrophotography shutter speed calculator here: enter the focal length of your lens, and set pixel tolerance at 2 pixels.

Then the calculator is going to give the longest exposure time you can use with that lens, without the Moon blurring in. Obviously this only applies if you’re not using any tracking device, and you’re shooting with a tripod.

More info on how this exposure time calculator works

Use Manual Focus with Live View

The AF of most cameras can become quite inaccurate at night. Usually they do a good job when it’s Full Moon, but the AF will probably hunt for focus during the totality when the Moon is dark red.

So it’s best to use Manual focus all the time.

Just switch the AF switch into MF or M. (For Sonys, in the AF menu, set to MF).

Then, activate Live View, magnify into the Live View, and set focus by rotating the focus wheel.

This can be done with almost any camera. Here’s my more detailed explanation of manual focusing.

Here’s a video of me focusing on one the stars at night:

Use a remote release or intervalometer

An intervalometer is a remote release that can be programmed. It frees you up from having to press the shutter button every once in a while.

Usually you can set the following parameters:

Delay – how much time it waits until it starts the program

Long – for how long it “presses down” the shutter button

Interval – this is the setting you have to set. This tells at what intervals should it press the shutter button (of course, it doesn’t literally press the button, it just fires a signal into the camera)

So you need to set the interval parameter only. In this case, it does not make sense to set the Delay and Long parameters other than zero.

Number – this sets how many frames it will take. I usually leave it on infinity

Shooting in RAW is necessary because this gives you freedom for editing. With RAW, you have a wider dynamic range and also the white temperature can be edited accurately.

Welcome! I'm Miklós Mayer, a photo tour guide in Hungary. My job is to show fellow photographers around in my home city and teach them everything I know about photography.

PLUS you'll also get a super practionable PDF guide to camera tricks that save a ton of time. 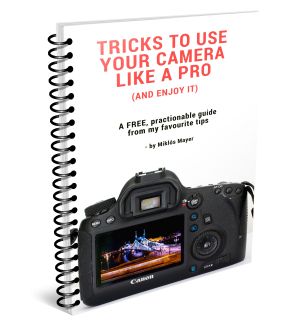 Previous Post: « The secret of sharp photos on Facebook: optimal image size, compression and sharpening tested
Next Post: Auto ISO: Why you should use it + how to configure it on any camera »

Do you know and use your camera's full potential?

There are tons of small tricks that can make your shooting experience a lot more enjoyable.

No, not the "Always use RAW" kind of advice. Instead, small but technical things most people miss.

Subscribe to my newsletter and I'll send you the "Tricks to use your camera like a PRO, and enjoy it" PDF right away.